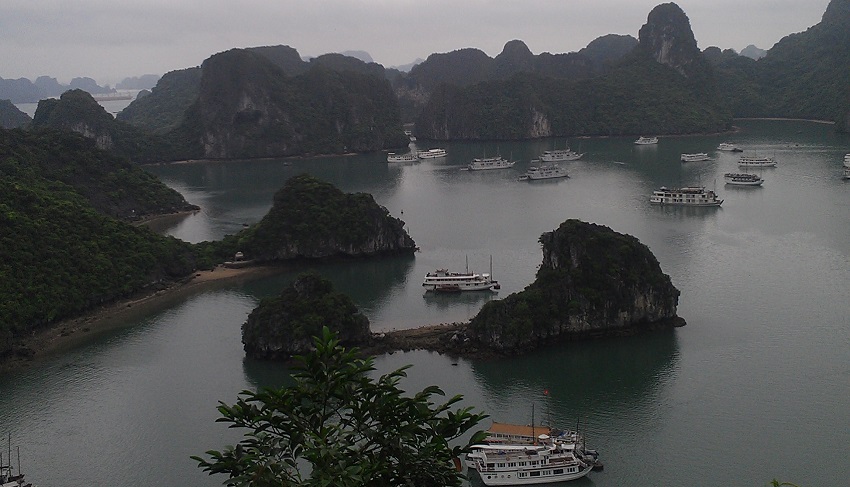 The main purpose of our trip up to Hanoi was to visit to Halong Bay, which has had rave reviews from pretty much every person we have spoken to who has made the expedition there. For those of you who have not been there or have not heard about it, it is a collection of small limestone islands that have been eroded over millions of years to have cliffs and caves and other impressive geological structures, and is covered in thick vegetation home to fauna such as monkeys and birds, all living on their individual islands in their own little micro-environments. These structures loom up out of the jade-coloured channels, the water being such an distinct colour of green, I assume, due to the type of rock that it is having it affect upon. Nic and I wanted to do a three-day/two-night tour of the bay, but unfortunately we timed it with a Vietnamese public holiday, meaning that the second night could not be booked as the hotel in which we were meant to be staying on the second night was booked out. If I were to offer a piece of advice for any new traveler, it would be to take into consideration your destinations public holidays, as they tend to occur at the most inconvenient of times.

However, we took the two-day/one-night option instead that would see us sleeping on a Vietnamese junk boat, which was still pretty awesome. The agent at Vega travel showed us a few photos of the inside and the outside of the boat we were to be staying on, and it was exactly what we were after. From the outside, it looked as though it could be a hundred year old relic, the oakey browns and polished blacks giving the vessel a certain archaic charm, but the interior was modern, refurbished and luxurious, obviously remodeled to match its new purpose. At about 8:30 in the morning, ourselves and ten others were piled into a van and were off on a three-and-a-half hour journey to the bay. I spent much of the time with my head in my book, but every now and then I would glance upward and see what we were traveling through, the scenery becoming more and more intense in both color and construction the closer we came to the coastline.

We arrived at the docks and negotiated our way through the hundreds of people and towards the small wooden motorboat that was to take us out to the junk. Looking around as we motored off-shore, I saw that there were several similar Vietnamese junk boats to the one we were shown in the picture anchored all around us, but none could have been ours as they were all covered in a careless coating of white paint, making them seem tacky and inauthentic. As we began to slow though, I realized that ours too had been doused in a sloppy pale covering, like cheap sunblock that doesn’t quite rub in properly. I later learned from our guide, Tim, that the mayor of Halong City, in some brief moment of rash stupidity and maybe without professional consultation, had demanded that all boats in the harbor be painted white, as white, in his mind, was a more luxurious and professional color. Unfortunately, not only has he missed the point entirely, but he obviously did not factor in white’s ability to make any blemishes on the hull, algae, moss, chipped paint, barnacles, stick out like a sore thumb. I can only speculate, but I think the whole of Halong City would have collectively facepalmed when that decision was made.

Despite this, the boat catered to our needs and more. We had lunch in the main dining area as we were chugging along, giving us an opportunity to get to know everyone. We had four Australians (including ourselves), two Kiwis, a Frenchman, a Spaniard, two Americans and two Brits, not quite diverse enough to hold our own Olympics but certainly heading that way. The food was quality and plentiful, and the scenery was unbelievable. Later, when we were admiring it from the deck, Tim pointed out a small floating village made up of boats of various sizes and large flat pontoons acting as the central path throughout. There didn’t seem to be any power running to the village, but I am not sure if there is a central generator or if it just operates under candlelight. I get really enthused when seeing things like that, I am not really sure why. I think its appeal is that of the idealistic escape, something that looks so impossibly remote that it can’t be burdened with the same system-oriented psychological problems that are faced by the rest of the world. A better path exists, and these might be the people who have found it. However, it did have its own little floating central bank in the heart of town, which makes me think that the town itself mustn’t be entirely self-sufficient and would have to tap into a wider economic stream for various resources, leading to a similar economic model, with its people locked in their own version of the daily grind, whatever that may be. Just further confirmation that my expectations of how the world should operate are unrealistic. But still, a man can dream.

We eventually came to a halt at the base of one of the islands, and were informed by Tim that this was “Surprising Cave”, a cave discovered many years ago by somebody who was obviously surprised by its depth. And, to his credit, it was surprisingly deep, each cavity having a small exit at the back as if by design, which also served as an entry into a further monstrous cavity. The walls were covered in coral like shapes made from the flow of the water across the stone, and there were stalagmites and stalactites hanging like chandeliers from the ceiling. There were hundreds and hundreds of people, all following the same path throughout and stopping to take a snap with any particularly intricate or familiar structural anomaly, but even still I tried to imagine what it would be like to be the first to discover something this spectacular, and decided that the man who named “Surprising Cave” was probably a very difficult man to impress, and could possibly have settled on a more enthusiastic adjective. After about an hour, we emerged from the cave and picked up a few canoes (I think they are canoes, they might be kayaks), so that we could roam the channels ourselves and do a bit of discovery. There were two people to each canoe, so Nic and I were paired up, me providing bursts of acceleration from the back to get us going, and Nic doing alright in maintaining our speed from the front. There was a haze across the water that seemed to add to the mysteriousness of the setting, making the giant silhouettes that were the islands in the distance seem even more foreboding, like living creatures wading towards us through the fog as we drifted in their direction. We went through a pitch black tunnel as it was going on dusk, no sound other than the echo of our paddles as they splashed the water, then emerged after about twenty meters or so at a lagoon with monkeys eating the fruit in the trees by the waters edge, leaping from branch-to-branch above us like we weren’t even there (except for one, sitting on his vine, munching on his little round ball of nourishment and giving us the stink-eye). The worst part about the whole thing was that as we were in a canoe that was an eighth full of water, we couldn’t bring the camera. You are just going to have to take my word for it when I say it was pretty effing incredible.

We returned to the main boat in a sufficient amount of awe, and I went for a quick swim while Nic had a shower. Dinner was not for a few hours, so we had a couple of beers on the deck and admired our surroundings as they faded to black. Everybody was pretty rapt with the entire experience thus far, and that general euphoria translated well into dinner conversation, especially with buy-two-get-one-free happy-hour running for a great portion of the night. Dinner saw us making our own fresh spring rolls (fate obviously insisting that I have not embarrassed myself enough) and then an array of clams, mussels, fish, veggies, curry and other dishes were bought out for us to chow down on. The food was top of the line, which, to be honest, surprised me a little seeing as the kitchen they were operating in was tiny.

One thing that must be mentioned is “the rice trick”, something introduced by Tim as a means of getting everybody talking amongst each other, although that seemed to be happening anyway. He announced that he would buy a beer for anybody who could elevate a glass of rice off the table using one single chopstick, with the rules being that the chopstick must be protruding out of the center of the rice, and neither your hands nor the chopstick could touch the sides of the glass. With the amount of time and thought we all invested into it, you would think that it was a challenge declared formally by the country of Vietnam to us selected representatives of the rest of the world, the final decider in a battle of minds, the pride of our respective countries ultimately dependent upon whether or not we could collectively conjure the ability to levitate rice from a table. Try as we might, nobody could work it out. The Americans seated to our left, TJ and Shena, came up with a theory about centrifugal force that they were too scared to try (if it was not the correct answer, it would make for a hell of a cleanup), but aside from that, everybody feared it would be a solution hidden in the semantics of the question, like “I said hand can’t touch the sides, I didn’t say fingers”, a solution that would make us want to flip the table and throw Tim and his stupid glass of rice off the edge of the goddamn boat. But, it wasn’t, the solution was every bit as surprising as we had hoped it would be. I would like to tell you what it was, but not only would that mean ruining the mystery behind “the rice trick”, but it would also mean that Tim would be buying beers for anybody who plans to make the trip there in the future, which is not really fair on Tim. One thing I will do, though, is apologize on behalf of Nic and myself for letting Australia down.

The following morning we went to a beach and a lookout that Nic was able to bring her camera to, so rather than describe the indescribable, here are a few pictures of the place:

We climbed the 424 steps (from memory) to the lookout, went for a quick swim in the cool green water, boarded the boat, said goodbye to those who were lucky enough to continue on to Cat Ba island on the three-day/two-night trip, and we were back on the bus to Hanoi. I really wish we had of been able to stay for that extra night as everything about the trip was just so enjoyable, the people, the backdrop, the exploration, the food, but I guess we will just have to remain content with the time we had. However, if the opportunity arose, we would have no problem heading back there and doing it all again, probably with a waterproof camera this time.
nic on vietnam > < hanoi