The following day we had nothing cemented in, and after flicking through the Lonely Planet, Nic, with the best intentions, suggested that we should make the 11 kilometre scooter trip to Echo Beach. Now, there are a few things that I must first mention before I go on about our little trip.

The traffic in Seminyak is not like the “traffic” in Lembongan, where I learnt to scooter. It is narrow streets filled with cars and trucks and bikes and scooters and vans that all behave like a collection of symbiotic organisms, finding their way through a set of horn-based rules that border on telepathy. And, if I had not had been enveloped by them first hand, I would probably still be of the opinion that there are no rules at all.

Reuben was once, and has been at several stages, the proud owner of a motorcycle, so torque, weight distribution, braking, acceleration, it is all second nature to him, all instinct. It is one of those things that he would usually brag about, but, in this context, it serves to incriminate him.

And the last thing that I will mention is that on several stages I had discussed with Reuben my inadequacies as a novice scooterer, explaining how tentative I was about riding in what we were about to ride in, and if I was to follow him (which I was, because he had…ahem…mapped and memorized a way for us to get there), then I was not going to go at a speed I did not feel entirely comfortable with. And Reuben assured me, with absolute sincerity, there was no need to rush and that we will get there when we get there. Easy as you like.

There was an omen that this was not going to be easy literally about four or five minutes into our journey. We were forced to stop at a set of lights where a couple of Indonesian cops had set up for the day, and as soon as they saw the helmetless Reuben, they were onto him like white on rice. He did his best to ignore them yelling in his face to pull over, but he could not avoid them dragging the front of his scooter towards the side of the road. Their eyes then set upon the blue-eyed and blonde haired duo behind him who were looking on with concern, and they raised their accusatory finger in my direction. Rather than make an effort to fight it, I figured I was doomed to the same fate, and pulled my scooter in behind Reuben’s.

For those of you who don’t know, the Indonesian police are not like those in Australia. Bribery is their business, particularly when it comes to two Caucasian men (minus one helmet), both without international driver’s licences. I find it to be a bit of a moral predicament. I understand that it is the law, but it is very difficult to take any law seriously if its implementation is racially bias, and even more difficult when the money you end up paying goes straight into the back pocket of the cop that caught you. Essentially, all the the traffic police in Indonesia seem to be doing is damaging the tourism industry, and when you are caught by them you don’t feel remorse. All you feel is bad luck.

They ushered Reuben into their little booth on the side of the road and sat him down, explaining the many things that they could have got him for, but didn’t. The policeman then said that he will be kind to Reuben, and requested that he pay them 250 000 rupiah ($25 AU). The same process was done with me, although I only had 300 000 rupiah ($30 AU) on me in three 100 000 rupiah notes, and thinking that I was never going to see that money again, reluctantly handed it all over. I received my 50 000 rupiah in change (after all, they wouldn’t want to steal from me) as well as a “thank you very much” from one policeman, while the other nearly went to shake my hand as I exited the booth. A bizarre means of authority.

We were all pretty disheartened, and Reuben decided to head back in the direction we came so that he could get his helmet from Heliconia. But, just as we began to turn around, the cop dashed back out of the booth, handing us each one of our 100 000 rupiah notes back and shouting “I be kind to you, I be kind to you”. I can only assume that he thought we were heading back somewhere to dob him in, because the obvious power shift had me completely baffled. But not Reuben. A walking cliché, Reuben threw the note to the ground in a profound act of defiance, yelling with bravado “piss off, I don’t want your money”. And then, with the cop walking away, subtly picked it back up again and stuffed it into his pocket.

After the helmets were retrieved, the better part of the next hour was spent circling the same stretch of road, and ending up right back at the Villas again. And during these laps, Reuben was easy to follow. Countless times we were cut off by trucks and cars that presumed the comfortable gap we were leaving between us and the person in front was for them to shuffle themselves into, and Reuben would patiently pull himself over to the side of the road and wait for us.

However, by our third lap, I could see that he was becoming more than frustrated with both me and himself, and right before the conclusion of the third lap (after which we had all decided we would give up on Echo Beach and go somewhere a little closer to home) something flicked over in his mind. I could see in his eyes that this was no longer about the expedition to Echo Beach, and our collective skepticism was just another obstacle for him to overcome. It had become a battle beyond rationality, a battle between Reuben and the world, a battle that he was losing. And anybody who knows Reuben knows that he hates to lose.

He indicated and pulled over to the side of the road, disappearing into a random establishment while the three of us apprehensively sat outside. Without saying anything, I think all of us knew Reuben was in a fairly volatile state of mind and was capable of some drastic measures, and it came to nobody's surprise that he returned a few minutes later with the shop owner and said to us “this guy is going to show us the way, all we need to do is follow him.”

Amidst the complex vehicular tapestry of the Seminyak roadways, it was now myself, following Reuben, following the random Balinese store clerk. Easy as you like.

Whatever the route was that Reuben had intended to take us, it was not the route that we were taken. At every possible juncture that I thought we might be heading coastal, we went inland. Nic had become suspicious, and had forwarded her suspicion on to me when she informed me that our guide was not actually a store clerk, but a money changer. It may be unfair, but I remember reading somewhere that money changers were a dodgy species by nature, as if the constant flow of currency in their palms has only served to increase their appetite for it. But, at that point we were so lost…what other option did we have but to follow?

I remember traveling on what we all later spoke about as “the yellow brick road”, a thin elevated brick path that was barrierless on both sides, with a half a metre drop to rich green rice fields across a backdrop of tropical jungle. It was a spectacular part of the world, and one we will probably never have the opportunity to see again. But I think I would have enjoyed it more if I was not focused on following the Reubley’s, who were weaving their way through the trucks and vans in an effort to keep up with old mate as he gradually disappeared into a speck on the horizon. I tried to keep up and overtake a truck, and in that moment an influx of preteen traffic came flying around the bend.

And then came the incident. Try picture that awkward moment when you are walking down a hallway and the person approaching you feigns for the same direction you are headed, and you both become locked in synchronicity. Then try picture that both parties were traveling at 60k an hour, and one of the partys is a hyperactive 6th grader. I still have no idea how we missed each other, and one of the kid’s tooted and laughed at how close we came. For the sake of readability, I will not go into the expletives that I was screaming about Reuben.

After a trip that seemed to last a lifetime, thankfully, we began to see a few signs to Echo Beach, and finally a splash of ocean in between a collection of white restaurants. The first question we had to ask Reuben was “so genius…how the hell do we get back?”, but once we had settled we saw that, even under a little bit of cloud cover, it was a beautiful place. It had a phenomenal left-handed wave breaking about a hundred meters from our table at the restaurant with only one guy out surfing it, and even though it wasn’t quite working to its full extent, I could see it had the potential to be world-class.

We ate some food that wasn’t too great, explored the rocks a little at low-tide, and before we knew it, it was time to leave again so we could beat the setting sun. Bravely, rather than get another guide, I suggested we try and wing it back home. I figured that the traffic would all be headed towards the central hubs of Bali which would make Seminyak a lot easier to find, and if it was just the four of us, then it was better the four of us be lost than only Nic and I. The trip home, while still chaotic, was nowhere near as strenuous as the trip there, and the girls got some great snapshots of us traveling through the streets on our scooters, my favorite of which is below: 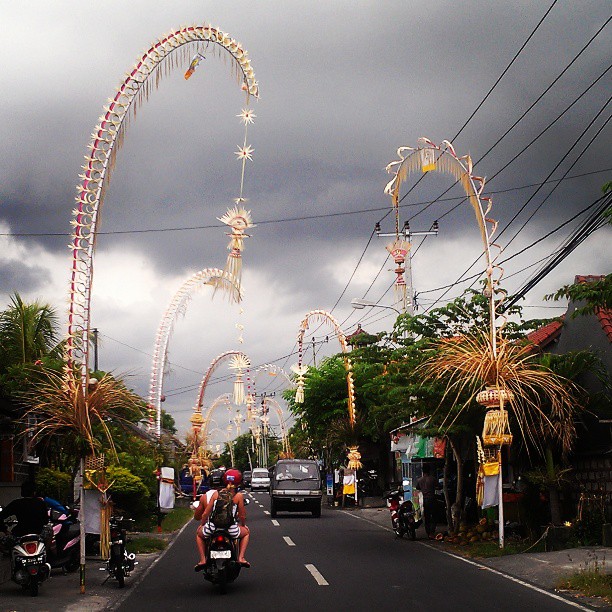 Writing about it now, I can look back on the whole experience fondly, partly due to the fact that I am still here to write about it. And, with utmost gratitude, I do thank Reuben for dragging us kicking and screaming into an experience we may never have ever again. I can even see myself making the trip to Echo Beach once more in the future, chasing up that empty left-hander. If I do though, I cannot stress enough, it will be under the guide of a much more reliable source of direction.
back to lembongan > < queen's tandoor