The City of Broken Dreams 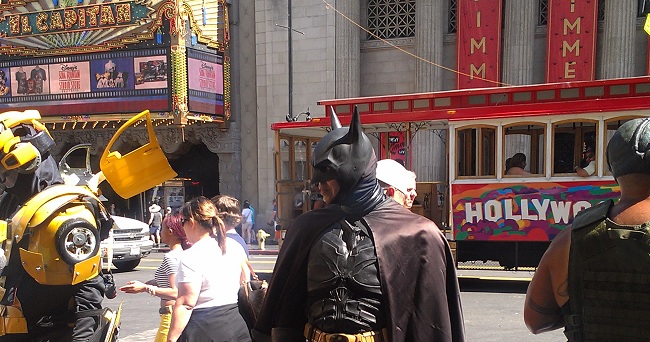 LA is a city of highs and lows.

In the distance lie the Sierra Mountains, stark reminders of tectonic instability, while the city itself spans across the LA Basin, a low flat stretch of land that sits barely above sea-level and seems to extend all the way to the feet of its omnipotent overlords. There are lines upon lines of beautiful white beaches hemmed in by crisp blue ocean that bows to the natural contours of the coastline, and it is all beneath a vast brown cloud of industrial smog. There are homely rolling green hills that are often forgotten about as they serve as the sites of some of the most famous man made icons in the world. And living amongst such reckoning contrast are people who can roughly be split into two categories: the ones who will make it, and the ones who won’t.

We were hours early, so the Hollywood Bowl was all but empty. Mike had booked us tickets to bask in the nostalgia of “Bugs Bunny and the LA Philharmonic Orchestra”, and as I was walking back with an armful of cushions for our posse’ of eight (Mike and Bindy, Arabella and Arcadia, Paul and Pat, Nic and myself), an out-of-place tattooed rebel seated next to the booth looked up from the book he was reading as if to deliberately initiate eye contact with me.

“Not too bad buddy, and yourself?”

Fairly simple dialogue, but my brain processed it as,

I made a sound that was neither a response nor a non-response, something like “hemelemmph”, and before I could think of what to say to recover I had already walked too far from him and he had gone back to reading his Bible. I should have just said “thank you” or “he loves you more, champ”, but unfortunately for me, my default response to the big topics is not very colloquial. It was a stupid reaction, but I was just caught a little off-guard by the abrupt introduction of religious belief into what should have been nothing more than a friendly how-do-you-do, and I still find it very interesting that he felt he needed to tell me that.

After a few hours the sun began to fade and the place began to fill. It seemed to get a pretty even scattering of people between “I am here for my kids” and “Bugs Bunny is my life”, as there were more than a few over the age of 35 dressed in horned-helmets and blonde pigtails for the episode “What’s Opera, Doc?” (trust me, you have seen it). I got the impression that there were a lot of orchestral instrument players in the crowd as well, I overheard a couple of conversations about how they wished that there was a screen dedicated entirely to the orchestra. I saw more than one child ignoring the cartoons and peering down to watch the source of the accompanying score, something that I would never have done at the age of 7 or 8. The kid a few rows down from me was exactly the model, a plaid collared shirt the same style as his Dad’s, speaking with eloquence and impeccable grammar, well-groomed, patient and polite. And what better way to plant little seeds of musical appreciation.

By the time the first episode had started, the lady behind me was so excited I was worried she might faint, and whenever Bugs was about to do something silly I could hear her giggling with anticipation a few seconds premature. You would think it would be annoying, but it wasn’t, as I had seen almost every episode before and I knew exactly what she was laughing at. In fact, I think you would be hard pressed finding a person in the theater who had not already seen everything that was shown that night. For just about everybody, it was a glorious trip down memory lane. At first I found such enthusiasm over something so trivial a little bit weird, but in a world gone mad it is the sane who are the outcasts, so I quickly embraced it and refrained from any judgment. People were applauding and jeering, yelling out at the breaking of the 4th wall as though it were live theater. It was a communal regression back to the warm simplicity of childhood. And it was great.

A couple of days later, Bindi played host to Pat, Paul, Nic and myself on our trip out to Hollywood Boulevard. I had heard from many people that the place was not as glamorous as it was chalked up to be, and Bindi affirmed this. Whenever we passed the unfortunate and malnourished stranded on the side of the street, she would turn around to the rest of the car and say, “See, see what I mean. The city of broken dreams”. And as we got closer to its core, it seemed that the “broken dreams” were becoming more and more abundant.

Hollywood Boulevard was what I expected Vegas to be; plenty of sights to see, but an unflattering dark side making itself apparent wherever you go. We parked in an area right next to the theater where the Academy Awards are held, and emerged in the spot where the red carpet is rolled out. Apparently, during the awards, the entire area is covered in black sheets so the cameras don’t catch the banality of the small collection of stores that the celebrities have to walk through, instead making it feel as though the ceremony is in some unattainable golden kingdom filled with beautiful smiling happy people free from the troubles of the real world. Each pillar in the complex lists a group of Academy Award winning films in order of years, with the final couple of pillars at its entrance showing a series of blank spaces for the series of years between 2070 – 2076 (from memory). Obviously somebody didn’t foresee this tradition lasting until the year 2077.

And so began our stroll down Hollywood Boulevard. With fame being the most prevalent resource, everybody is doing everything they can in order to claim and sell their slice of it. Five Spidermen, two Iron Men, two Batmen and three Supermen wander casually down the street, undeterred by their redundancy, making brief stops to have a photo with the all powerful Commonman. I saw Darth Vader wandering around with his mask lifted up to expose his face, and I wondered what a six-year old Star Wars fan would think when he discovered that Darth Vader was not in fact Anikan Skywalker, but was instead just a rather a bitter looking sweaty Hispanic shouting “get your photos, right here folks, get your photos”. Only in the city of broken dreams.

We walked the starry walk with our heads down to see the hundreds of famous names, and also to avoid catching the eye of a few shabby individuals walking back in the other direction. The street performers are amazing around Hollywood Boulevard, it is busking at another level of anything I have seen before. There were a few kids break-dancing to the sound of their boombox, just simple popping and locking, but with the dislocation of limbs adding a shuddering third dimension. We watched on for a little while, before moving around to an area of path out of the way of the hoards of people shuffling their way through. As the sickly sweet scent of a clothing salesman toking up engulfed us (Mike told me that weed is everywhere in LA, there are more “medicinal” marijuana stores than there are 7/11’s), we couldn’t help but glance over at a guy standing a few meters away from the buskers, but still in earshot of their boombox.

The image of him stuck with me for a little while after, a bearded man dressed in a filthy rag of a black shirt and loose shredded jeans who, at first glance, you would think was anywhere upwards of thirty five but could possibly even be in his forties. But the longer I stared the younger he got. Beneath that disheveled front, his pale glazed expression carried with it only a few tiny strategically placed wrinkles around a set of saucer-like pink eyes, similar to the crows feet on mine. Within this stereotypical container was a man no older than me.

As the sea of slowly migrating tourists made their large arc around him, he stood flat footed in the middle of the path, arms slightly bent while he bobbed up and down very subtly, barely in time the music. But the thing that really got to me that I found so sad was that you could see that this man was not standing on the footpath of Hollywood Boulevard and bobbing to the second hand beats of a street performers boombox. He had been transported to a place where nothing around him mattered except what he was hearing. In his mind, he was somewhere where there was nothing. Nothing but the music.

I think about the young tattooed rebel sitting on the steps of the Hollywood Bowl reading his Bible, and I wonder if he has been there before, if he has traversed the tightrope of the highs and lows of LA long enough to have experienced both of them, and if it was his belief that bought him back.

I wonder whether he knows first hand that the difference between slipping one way or the other is some stranger reminding you of an endearing influence that will love you regardless, somebody who sees you of value, somebody to come and help you pick up the shards of your broken dreams.

With guys like that sitting around the place, I guess it is no wonder they call LA “the city of angels”.
misery is wasted on the miserable > < viva las vegas