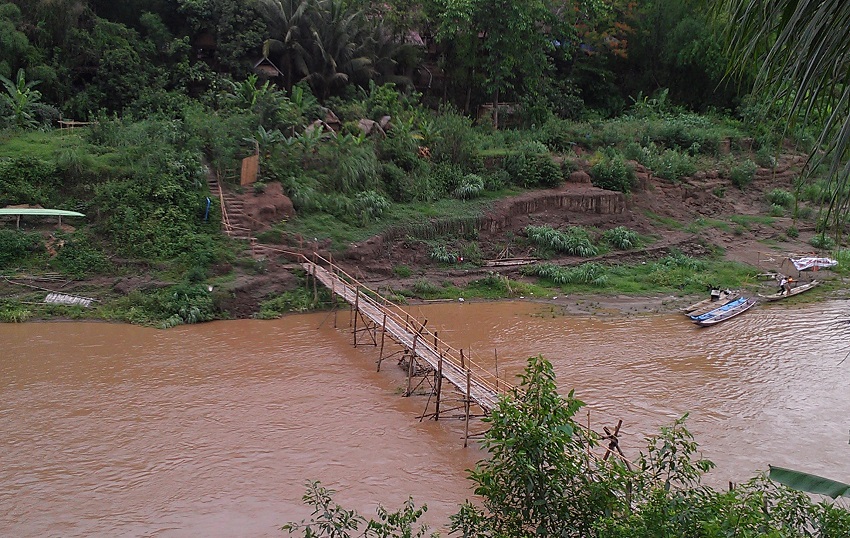 Luang Prabang was the perfect change up from Hanoi. It is tranquil to the point of cliché’. With Buddhist monks in orange robes walking the streets, green scenic mountains on all sides intermittently blocked out by temples of worship, amazing waterfalls a short ride away, an 11:30pm curfew, and both the Nam Khan and the Mekong Rivers providing pretty backdrops to just about any venue you go to, it really has kept an aura of serenity and isolation, even if it may indeed eventually lose it.

As it is in its early stages of tourist contact, the rites and traditions of the town are still very much a part of the daily life of Laotian people. At sunrise, from our hotel we will briefly hear the beat of a lone solemn drum emanating from a temple a few hundred meters away, signaling the beginning of the morning alms. The monks then walk a path throughout the town in a state of meditation, with the Laotian townspeople handing them small balls of sticky rice as they do, serving as a means of food collection for the monks, and as a means of spiritual redemption for the townspeople. From everything I have read, the religious rite is one of the thing that has tried to be protected from tourist influence, as it contains strict rules to ensure that the monks are not interrupted from their meditation, rules that are often unknowingly broken by those foreign to the nature of the ceremony. As such, it is not something that Nic and I have attended, or will be attending. Anyway, for some strange reason, there is something about the presence of the monks that both Nic and I find to be oddly intimidating. When you see their orange robes, sandals and shaved heads walking in your direction, it almost feels the same as when you see two uniformed policemen walking down the street, struck by a brief moment of anxiety that has a source you can’t trace. I am by no means religious, but I had attempted to diagnose it, and I think it comes from a sense of grave respect. Not a respect that is closely knit with idolization, but more a respect of admiration, that these people are holding such clearly defined beliefs (thankfully noble and benevolent) that they are willing to sacrifice their whole life for, and that, in a sense, should be approached with reverence. It is like a profound honesty; their belief is unquestioning, and it is proven in their practicing of it, all completely transparent as if daring it to be judged. Adding to this, the temples surrounding you are feats in architectural beauty with their golden Buddhas and red and black dragons, so you really do feel as though you are stepping on sacred turf, and it provokes a strange mixture of emotions.

This is not to say that it doesn’t have its commercial side. Restaurants/bars such as “Utopia” have recognized what they have got, and take full advantage off it. A barrier-less bamboo balcony overlooks the Nam Khan River, and mellow music that is surprisingly alternative pumps out of the speakers from the morning onwards. If it wasn’t for the continual reapplication of bug repellant you could easily spend your entire day in a sprawled position on a couch or cushioned floor mat. Last night was Nic’s birthday (Woohoo! Happy Birthday Nic!), and herself, myself, and the two American’s we met on the trip to Halong Bay, Shena and TJ, arrived in the early afternoon with the intention of getting a bite to eat or a smoothie, and didn’t end up leaving till close. We played cards, drank beer, joined in on a game of volleyball, watched youtube videos on the big screen, all to one of the most diverse soundtracks I have heard that slowly ascended in intensity as the night wore on.

One thing that I am still a bit torn on, though, is the food. Don’t get me wrong, I have had some fantastic sandwiches and French pastries and other things, but nothing that has struck me as both authentically Laotian and memorable (aside from the BBQ’s, but more on that further down). We have tried to find what we were after, we heard of a place called Tamarind that has a great cooking class and serves a large selection of authentic Laotian food, but it was closed for relocation. We then tried the next best place for a Laotian cooking class, and the chef was absent, meaning the classes were not running. As the other ones did not have great reviews, we decided we would rather save our money for something else than book the course on principle, so, it is very difficult to have an opinion of the cuisine of Laos because I feel we have barely scratched the surface. There is one thing, however, that we did think might be better here after being so spoilt for choice in Vietnam, and that is the street food.

At first, you look at the vegetarian buffet’s that are basically all you can fit on your plate for 10000 kip (about $1.30 AU), stacked with dishes the likes of which you have never seen (and neighboring skewers of meat for another 10000 kip), and you think “this has to be street food heaven”. But then, after you have finished loading your plate with nameless grub and negotiated a seat at one of the benches full of other frenzied tourists, you take the first mouthful and realize that not only is everything cold (particularly bad for the deep fried dishes), but the salads and the rices and such all carry with them only a minor difference in flavor, and a noticeable lack of freshness. It makes you wonder if it was actually put together that night, or if it was just what was left over from the previous. As you may have determined from the Sari Bundo trip on the first week, leftovers do not bother us, but it is with the condition that they are not old enough to harbor any unwelcome microscopic guests. I might be wrong, but I get the feeling that some of the places might violate that rule, and eating there is just rolling the dice.

The street stalls also sell salad baguettes, with tomato, lettuce, mayo, cucumber, and a choice of chicken or egg or tuna or whatever you want, and they all have a collection of plastic cups with combinations of chopped pieces of fruit in them out the front for the quick blending of smoothies. I didn’t mind these, I still don’t actually, but I have a sneaking suspicion that one of them has been responsible for my stomach illness that I have been suffering from for the last three days or so. I have been sharing most of my meals with Nic, and she has had a few unsavory moments, but nothing like what I went through. It started with a temperature and accompanying headaches, then all my joints were sore, and now it is just a gastric bug that I can’t shake, with no noticeable symptoms other than those related to the consumption of food. I have braved it, but I really wish my micro-flora would stabilize. It is not fun having to leave Nic in a restaurant by herself every time something that should be gastronomically sound becomes the catalyst for an abnormal reaction.

But, even with the random explosions, I have to remind myself what I am doing, where I am, and how lucky that makes me. It is sad that we didn’t get the most insightful trip into Luang Prabang from a food perspective, but that just means that it will have to be revisited down the track, along with the other parts of Laos that we did not get the chance to visit. This trip was just dipping our toes in. Next time, we will be swimming.
the pre dinner entertainment > < nic on vietnam