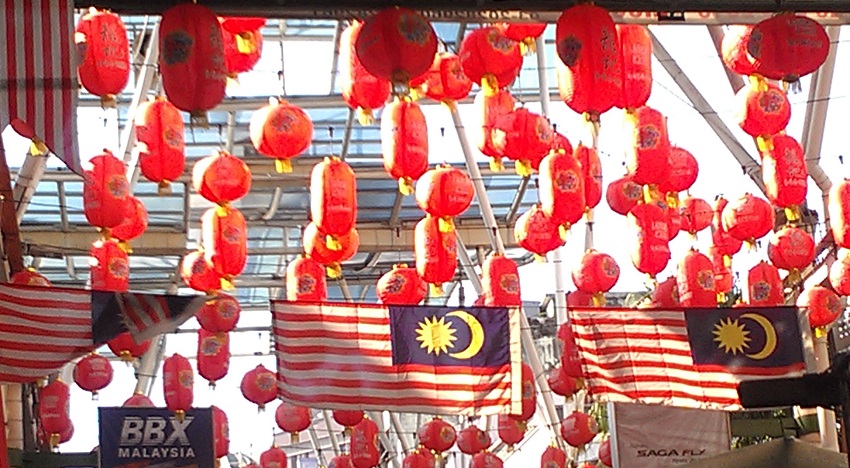 Kuala Lumpur is probably the most developed city we have explored thus far, scoring a solid ten on the curb and gutter scale. In many aspects it is like Sydney on steroids, particularly in the layout of its shopping centers and the prices of its beer. Nic and I went for a trip out to Petronas Towers, with Nic not expecting such great heights and literally cricking her neck when she glanced up at them…it was classic. We went to Pavilion shopping centre for some dumplings, walking past Chinese, Malay, Thai, Turkish, Cambodian, Spanish, Japanese, Lebanese, and Italian restaurants all within about 100 meters of each other. Feeling reassured by the ultramodern décor and the satisfied crowds of people, we stopped in for some quick Japanese before our Chinese, the Hue incident doing nothing to repress my deep yearning for it, something that borders on an addiction. Thankfully, both dumplings and sushi were positively glorious, exactly how I would expect them to be, and enough to keep these two sushi junkies going until Canada. Or at least until next week.

D’Oriental Inn, where we are staying, has a slightly different surrounding that the city centre. It is a hotel located in Kuala Lumpur’s Chinatown, right smack bang in the center of food stalls and flea markets. You would assume that this would make the place relatively noisy, but you would be wrong. It is noisy alright, but that is because the sound of somebody whispering on one side of the building is enough to vibrate someone out of bed on the other, and we have about 4 or 5 teams of schoolgirl basketballers staying in the same place. On our level. This means that the ambient audio of the place is quite similar to that of two removalists attempting to move a slate pool table with all the balls on it down a set of wooden stairs, while a group of girls yell conflicting instructions from the lower floor. The acoustics are so terrible in our room that if we speak above a low hum we can hear it echoed back to us, and when some Malaysian kid cracks a funny in her room and sends the rest of their team into hysterics, it is like we have a live studio audience laughing at our attempts to sleep. They were literally sending Nic insane the other night.

But, aside from that, it has all the necessities, and a couple of luxuries like hot water and air-con. One thing I am yet to mention about this trip is Nic’s uncanny ability to automatically understand the plumbing of any new hotel we happen to enter, as if all her time spent in the bathroom has been less about applying product and more for the purpose of thorough investigative research. When a budget hotel promises hot water, you get your hot water, but it is through a system that is usually some afterthought hack of an attachment thrown together so that the room can be deemed worthy of an extra ten bucks a night, meaning that there is a process involved; flicking switches, pressing buttons, adjusting dials. If I was by myself I would be more likely to suck-it-up and deal with five minutes of chill every morning rather than pore over a set of frickin’ blueprints, but fortunately I have to do neither.

“Hey Nic? Did you get any hot water?”

“Yeah? You probably haven’t flicked the switch behind the television.”

“You need to flick that, then turn the dial to seven on the main console in front of you. That will get you hot water, but be careful because there will be no cold, so to get the cold, flush the toilet three times then turn the tap in front of you anti-clockwise for half a rotation before turning on both taps at the sink and turning them off again. The shower will stop for a second, you will here a grinding noise, and then it should just work. That’s what I did anyway…”

How she knows this information to get the hot water in the first place, I will never know.

As we have decided that beer drinking is an activity that is too expensive to partake in here in Malaysia (the taxes on alcohol are nuts, one beer is about $8 AU) I have developed another habitual consumption pattern that revolves around cold coconuts. The vendors keep them on ice, and when you order one they remove it from the icebox, get out their cleaver and begin hacking away, leaving you with a straw and a spoon in the open hatch at the top of it. Apparently the water from the coconuts is meant to be even more replenishing to the body than just regular bottled water, and the flesh of the coconut comes away easily when you scrape at the inner walls, so you satisfy both hunger and thirst in one simple vessel. Just like beer! It is definitely not a full conversion, but it is a good temporary substitute until the prices of both beer and coconuts swap back to their natural order.

However, as is usually the case, on Friday we decided we have been so disciplined that we deserve a reward, a pint or two during the Collingwood game. We located a sports bar on Changkat Bukit Bintang, the street we had walked down trying to locate “Dining in the Dark” (more on that below) that is right near Jalan Alor, a street food paradise we could stop off at for a bite to eat on the way home. It looked the likely place, a group of Australians inside watching the Wallabies game and a large screen on the empty balcony out the front. We asked them if they could possibly put the AFL on the outside screen, and as it turned out, the game was just in the process of being flicked over for a few local Australians who live around the area and come down regularly for it. Well, we didn’t end up leaving till after midnight, our budget being quickly exhausted and our newly met friends offering to foot the bill for beer after beer after beer, which we could not help but graciously accept. You may not believe this, but at one point Nic and one of the other guys were on stage performing as backup singers for the live entertainment, clicking and swaying and singing “doo-wup” every so often…just making me proud.

By the time we walked past Jalan Alor later that night, everything had closed up. We knew the only place to eat cheaply that might be open was near our hotel, where there were a collection of little eateries offering stir-fry’s and claypots and the like. When we got there we saw that, strangely, the eateries were jam packed full of people, but not the kind of people you would expect to see at these sorts of places at one in the morning. We expected the venue to be packed with drunk backpackers, cabbies, night-shift workers, people eating as a means of filling their stomach but having some other more important priority, most likely work or bed. But instead the place was filled with Asian families, the model two-and-a-half-kids dressed to the nines, all seemingly oblivious to the hour it was and going about their meal like it was a Sunday roast. Nic and I were really confused, and felt particularly out of place being not just the only Westerners in there, but being stinking drunk around a bunch of well-behaved children in plaid shirts while the seamless operation of the family dynamic happened all around us. I became conscious that we might possibly be the stain on their night, and in most other cases we might have let it be, but we were starving and drunk, and therefore unstoppable. We quickly found a table away from the families and at the side wall, and gorged ourselves on some claypot chicken and BBQ pork noodles.

That night was the only night we slept soundly in our time staying at the D’Oriental Inn, and it only took us a thousand beers. It was our last night there, and we were scheduled to catch the bus to Penang in the morning, a five-hour bus ride that we felt we could do standing on our heads after our succession of much longer trips across the top of SE Asia. But, as is usually the case, trouble always happens when you least expect it (more about that later).

Before going to KL we had heard mixed reviews about it, some people suggesting that it was expensive for backpackers, some saying that there was not much to do or see. But we found that even on a backpackers budget there was so much to explore; the Petronas Towers, the National Arts Museum, even just walking around Brickworks and Little India is an experience in itself. And, as we have repeatedly discovered, if you spend enough time out and about, sometimes the city just picks you up and takes you for a ride.
dining in the dark > < nic on thailand