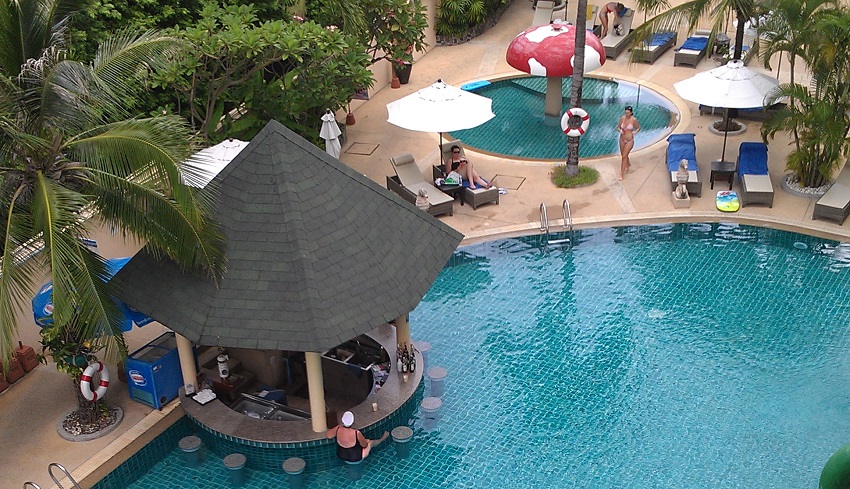 We left Chang Mai early Wednesday morning, heading down to Phuket to stay at a 4 or 5 star resort for five days, something that we had purchased as part of an OurDeal or ScoopOn voucher back when we were contributing members of society. The deal basically offered 50 percent off five nights at the Karon Sea Sands Resort and Spa, a place that would usually cost $100 AU + a night only costing around $50 AU a night at the time of purchase, and because it is a sunken cost, it now feels like 5 days of free luxury accommodation.

But, unfortunately, in staying at the places that cater more for the holiday-maker than the shoe-stringer, it is almost like you have voluntarily placed a label across your forehead that says “made of money”. While the room in which we are staying has windows and a balcony, a toilet that will not clog at the mere thought of flushing something other than your own raw bodily discharge, and compared to anything we have stayed in previously (except for Heliconia Villas, once again, thank you Reubleys) is exemplary, anything that does not include the fundamental basics of the room costs a comparative small fortune. An example is Wifi, which would cost us around $8 AU a day at Karon Sea Sands, but was a free inclusion in the $12 AU a night hotel we stayed at in Chiang Mai. In some ways it seems the more you pay, the less you actually get, as if catering only to individuals who determine quality by the amount paid rather than the other way around. It just seems to be a bit backwards.

And this excess in cost seems to be theme of Phuket. We looked at exploring the neighboring beaches of Patong and Kata, but there were two main things that deterred us. One was that the price of a tuk-tuk to get to these places, a neighboring beach costs about as much as if you were taking a taxi a suburb over in Sydney, and bargaining with the drivers is pointless as they seem to have the market monopolized. It is a dangerous thing to adjust your cost expectations in locations a little far off the tourist trail, as the mark-up then becomes too blatantly obvious to justify. But, the markup wouldn’t be so much of a concern if it were not for the second reason. If we thought we were going to see something spectacular, a must see destination that had rave reviews, then we would be $24 AU (there and back) lighter by now. However, from what I have read and seen on the maps, the beaches are all essentially the same, the same views and the same shops in relatively the same locations that offer the same selection for the same price. You can hire motorbikes for a fraction of that for an entire day, and while I might have vanquished my fear of the motorbike in Indonesia, from what I have read (which may also apply to Indo, but I was able to warrant because I was going somewhere I desperately wanted to go) the Thai police are prevalent and are likely to strip you bare if you are caught. It also doesn’t help that it is rainy season, and unlike other alleged “rainy seasons” I have been in the middle of, the weather here offers approximately three consecutive hours of sunlight before it buckets down with droplets the size of a fist, something that would not be fun riding in.

As sad as it is and as disappointed as we are, it is the rain that is the reason why we will be not heading out to the surrounding islands, instead deciding to save such ventures for a time when the weather is on our side. What has made the rain bearable is the fact that the room is comfortable and cosy, air-conditioned, has a refrigerator for the beers we purchase from 7/11 after relocating the minibar contents (like the scabs we are), the hotel has a gym so I can work on my greatly atrophied muscles and a pool we can quickly dip into when the sun peeks through the cracks. After doing the research, to no surprise our budget doesn’t get us a room on any of the islands with these facilities (although it may still get us free Wifi), so going out there in rainy season is an expensive risk to take with the more costly part of our journey coming up (doesn’t help that the Aussie dollar is the lowest it has been against the US for a couple of years, perfectly timed for our trip there). We just figure that our money might be better spent elsewhere.

Walking the streets of Phuket in the low season is a little bleak, with the shouts of “taxi” and “tuk-tuk” carrying with them a defeated resignation that already presumes a response in the negative. There are a vast amount of tailors here that are all desperately vying for my attention, and it is difficult not to turn my head when I hear, with a perfectly mimicked Australian accent, “howyagoinmate”. They have it down to a tee, and this fish has been hooked numerous times, I just have to laugh and shake my head when they drop the front and start pitching their sale for a custom made suit or a dress shirt. There is one specific guy who Nic and I found hilarious that uses the illusion of a shady operation to promote his merchandise:

“Hey brother…psst…come here,” I raise an eyebrow as he approaches. He leans in, indicating I should do the same, “I…ahh…I have some…ahh…some shirts that I think you would really like.”

We have been burnt a couple of times by restaurants that have been both costly and very average, so we quickly developed a reliance on TripAdvisor to point us in the direction of a few good ones that might not be cheap but were at least worth the money spent. We found one called “Papaya” that we have eaten at a few times, offering quality Thai food at a reasonable price, but aside from Papaya, the only other really memorable meal we had was a roast dinner at the Irish Pub; lamb, baked potatoes, peas, mint sauce, carrots, yorkshire pudding, and a whole heap of homesickness.

And that about takes us to our last day in Phuket…I told you nothing much has happened! Seeing that a decent shore-break had been bought in by the storm overnight, I just went for my first swim at Karon Beach, diving myself into a few lazy barrels, blowing the salt water out of my nose and shaking the sand out of my ears. Unfortunately, the swell was not the only thing the storm bought in, at one stage I emerged from the water with a small piece of plastic on my chest labeled with the words “Durex”. A Dutch-looking guy who was also in the water saw me standing with a look of horror on my face, and we both laughed. There is really nothing else you can do when that sort of thing happens.

I don’t want to taint Phuket for anybody who has been here before and really enjoyed it, or for anybody who might be planning to make a trip here in the future, as we are probably not in the right frame of mind to enjoy what it has to offer and we only really have ourselves to blame for the weather (after all, it is wet season). The good thing about lounging by the pool for a few hours every day is that it has really invigorated our passion to get out and just do something sketchy or eat something dodgy, a passion we will no doubt try and satisfy in Malaysia, even if its just for the sake of this blog. For the cause!!!
nic on laos > < riding an elephant