The trip back to Lembongan was a lot more eventful than the trip out there for a number of reasons.

The first was that, as with our arrival, Heliconia proved to be a mere mirage’ for the taxi service, but now we had a deadline we had to adhere to. After standing out on the street for the better part of 40 minutes, we received a phone call from our belated ride, and unfortunately, his English was almost as incomprehensible as my Bahasa. Thinking that I was helping him, I tried finding locations of interest around where I was, and did my best to associate them with myself. “Nama saya Hurley store, nama saya…ummm…Quicksilver store, nama saya Circle K”… translated: “my name is Hurley store, my name is Quicksilver store, my name is Circle K.” I am sure everybody around me thought I was a crazy person, and luckily the guy cleaning the driveway was able to intervene on my massacre of the dialect and take charge of our phone conversation.

The second was that Nic had been in contact with Semanya One about our unclaimed trip, and they told us that to get on the boat we did not need a ticket, only a receipt that showed we were booked in for a return trip that never happened. And, true to form, that day, due to a crack in the hull, Semanya One had moved all their passengers to another neighboring boat provider, which provider, they did not inform us. This meant we were relying on the same guys who didn’t have the foresight to make sure we weren’t booked in on a day they weren’t running to now forward on a message that Ben and Nicole do not need a ticket, only a receipt. It was touch and go.

The third was that, from what we could tell, the usual spot from where the boats depart in Sanur had become the site of a massive electoral campaign, and shouting military, police and locals were detouring all the traffic away from where we needed to be. In the madness, with our boat due to depart within the half hour, our driver told us to jump out of the cab in a carpark near Sanur beach. He insisted we wait there, and then disappeared around the corner.

After around ten minutes, we began to doubt our interpretation of what he said, and it had now become a decision for us. Do we wait for the driver who may never return and miss our boat? Or do we venture into the fray and try find out which boat we are booked for, of the thirty odd providers it could potentially be? In the height of confusion, a heavy set Balinese man who was redirecting the traffic (and was the spitting image of Buddha) must have seen the whole thing unfold, and he came to assist, provided us with a much needed third option. The phone call that morning had given us the number of the cab driver, and Buddha had a phone on him. And he spoke Bahasa.

It must have been a fairly strange conversation… “Hello, did you just drop off two confused Caucasians in a parking lot and tell them to wait there? Yes? Well, I am the guy who sent you around the corner in the other direction, and now they are wondering when you will be back.” We found out that the driver had no intention of returning, but wanted us to wait there so that the guys from the boat company could pick us up. And after that call, two minutes later, two smiling kids with matching shirts came and offered to carry our packs. But that was not the end of it. We were carrying two sets of packs, one large on our back and one small on our front, and as we handed over the colossal ones on our back, Nic’s face went ghostly pale. With a trembling voice, she leaned over towards me and said “I left my small pack in the taxi”.

The mental write-off began. Her laptop…gone. Power-point adapter…gone. Countless important documents…gone. The receipt for the boat…gone. I am actually quite proud of myself for the way I behaved in that moment. I did not get angry at all (it wouldn’t have helped anything, and I could tell Nic was about to burst into tears). I did not cause any sort of panic or alarm. I just informed the two kids of what had just happened, and made my way back to Buddha, who was going to have to save the day for us yet again. I only hope Nic remembers my reaction the next time I lose something important in the next few months, because no doubt I will.

We were told we had to go to the desk on the beach to show the tickets that we did not have (and now the receipt which we did not have), and had to leave the backpack issue in the capable hands of one of the smiling kids. Fortunately, Nic had saved a string of emails on her phone that gave some sort of plausibility to the story we were telling, but they still would not let us on without the receipt. Right before our boat was due to depart, I decided to make a quick dash back to the carpark to see if any progress had been made, and as I gazed aimlessly at the crazy scene before me, through the scores of people I could just make out, on one of the smiling kid’s backs. Nic’s backpack.

“Terimah Kasi!!! (thank you)” I screamed at the top of my lungs, parting a crowd of raised eyebrows. The second time that day I had looked like a crazy person.

The seas were angry that day, my friends. The boat ride out of Sanur was filled with screams and shouts, and at one stage we were tipped to an angle that I would have thought was irrecoverable. By that point, if the boat had sunk to the bottom of the ocean, well, we had done our best and I was prepared to accept that fate. But, as we motored out past the breakers and away from the insanity of the morning, we had an amazing view of a random surfer pulling into a perfect stand-up barrel.

Since our return to Lembongan, we have done much of the same stuff we had been doing last week, but this time with Reuben and Hayley. I took Reuben out to Shipwrecks, a surf break that has been home to some good waves for the past few days. Inadvertently, it turned out to be payback for the Echo Beach incident, and as he was floundering in the whitewater, copping wave after wave on the head, unable to move due to the fins being ripped from his feet, it must have been quite the ego-killer for him to swallow his pride and call out for my help. Yes, that’s right, asking for my help. MY help. But, I am not the one to become wrapped up in a battle of egos.

Aside from that, we have been eating good cheap food at the local Warungs and scoffing down on Nutella crepes from a place called Tigerlily’s, where the Reubley’s are staying. We went on a spearfishing trip in which Reuben caught a purple and yellow fish that the local’s said was tasty when grilled (I just snorkeled, knowing my limited knowledge of tropical fish species would lead to me shooting the last of a kind), and, like last week, there has been plenty of pool and plenty of sun. 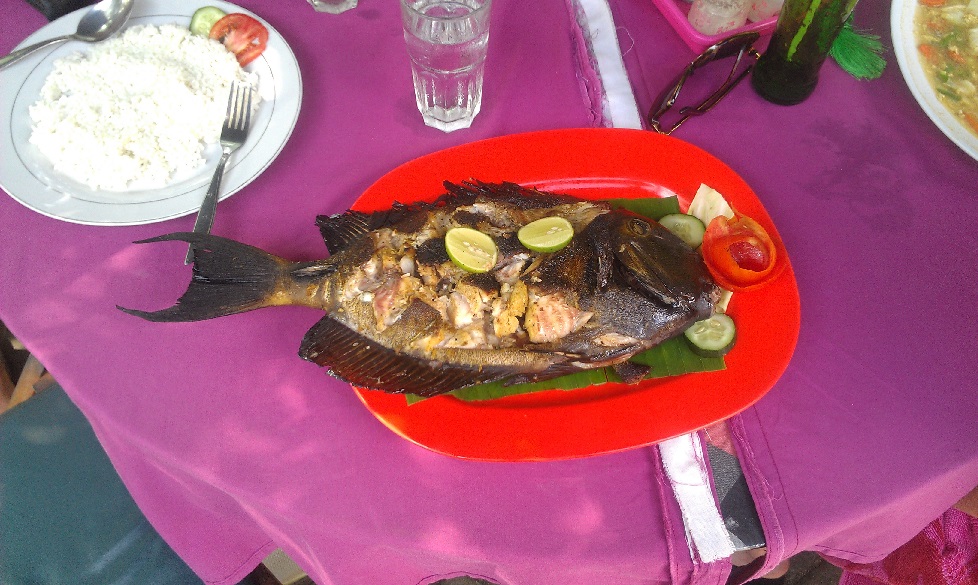 There is a plethora of stuff that I have missed out on, but if I am going to post this thing, I have to cut off somewhere. One thing that I have realized in writing this blog is that it is very difficult to convey an experience.

But, I will keep trying.
farewell to the reubley's > < the echo beach incident