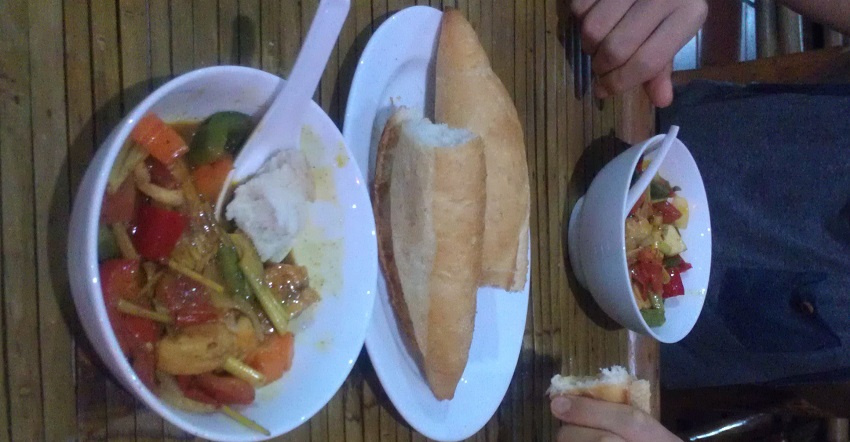 Another dubious name, “Baby Mustard” is what the Vietnamese call watercress, and is also the name of the restaurant/cooking school that Nic and I enrolled in on our first day in Hoi An, after seeing some very positive reviews on Trip Advisor. Unfortunately for Mr Trung, we had enrolled in Baby Mustard on the same day that we had intended on taking his guided tour, and we didn’t feel like exhausting ourselves by doing both on one day. We just don’t have the energy, we are not kids anymore.

We were due to be picked up from our hotel by Ngyuet, our guide, and then taken to the markets at 4pm, but she did not arrive till about 4:30pm as she went to another hotel by the same name, the “Phuoc An River Hotel”, obviously the wrong Phuoc An hotel (like I said, a dangerous name). Nic had to tell her we were staying at the one she was not at (a difficult feat with the language barrier), and fortunately, it turned out we were the only two people on the tour, so the delay had not held up anybody. Ngyuet took us through the markets to pick up a few things for the class, and as we were the only two, the experience was a lot more insightful than the markets in Indonesia. She showed us the different species of fish on offer and what you are looking for when you buy them. She showed us the cuts of pork we were purchasing and what the other ones were on the table (the head-to-tail cooking in Vietnam is incredible, every single section of the animal for sale right in front of you, and every part a different price so even those in lower socioeconomic demographics can eat and nothing much goes to waste). She showed us the varying types of noodles and how they are made, she showed us root vegetables and fruits that I hadn’t seen before and told us if they added sweetness or spiciness or sourness, and showed us a few Vietnamese desserts and asked if we wanted to pick out some to have after our meals. Before we left, I mentioned that we like chilli, and her face lit up like a beacon, taking us back through the market to the little red chillis and purchasing a small bag. I noticed that the prices she was paying for all these fresh ingredients was miniscule, a few cents here, a dollar there. If one was so inclined (and knew a bit of the language), they could last a long time in Hoi An on a very tiny budget.

The Baby Mustard restaurant is a fair way out of town. Ngyuet told us it was about 500 metres from where we were staying, but it ended up being about 5 kilometres, so I am not sure if she thought a metre was equivalent to about ten or if she is just terrible with distances. It is in farm country, vast green rice fields surround the property, and we later found out that the name “Baby Mustard” came about because that is the main leaf her family grows. Her mother wakes up at 2am every morning to harvest the Baby Mustard and make the trip into the markets for the day, and yes, I double checked that it was 2am, and that it was every day. We met her mother, who would have been about 45 or so (Ngyuet looked to be younger than us and had just completed a business degree in Ho Chi Minh) and she greeted us with a smile and a slight bow. To me, 2am is an hour that you stay up till, not that you wake up for, and as we weren’t due to finish our class till about 8pm that evening, I can’t imagine Ngyuets mother was getting the minimum 7 hours sleep a night. But there she was, grinning happily and more than willing to bring us a cool drink or help us burn our food. An admirable way of life.

The property also had a communal herb garden that is maintained by Ngyuet herself as well as the surrounding farmers. When we arrived there were four or five farmers in mollusc hats performing several different jobs; watering, filling trenches with seaweed from the nearby river (according to Ngyuet, the richest source of nutrient for the herbs), turning the soil, harvesting, replanting etc The entire environment and the processes going on around us seemed very traditional, almost sacred, and Nic and I felt we had made the right call in going with “Baby Mustard” for our cooking class, as it was not just teaching us how to cook, but was also giving us an exclusive look into the daily life of a small Vietnamese farming community. Ngyuet handed us a basket and a small blade, and we went into the herb garden to collect an assortment for or meal, and also to learn about what else was growing and what it does to your food. We collected lemongrass, Vietnamese coriander (like Chinese coriander but spicier), regular coriander, “baby mustard”, white basil, spring onions, lettuce and a whole pile of other stuff.

Without giving you a blow-by-blow of the three hours or so that followed, we had such a blast. Ngyuet was the ideal teacher, standing in front of us and telling us what we should do, letting us screw things up a bit but not too much, and tasting our meals as we went along, suggesting either a pinch of salt or a pinch of sugar that would change the whole complexion of the flavor. We cooked three dishes, a shrimp soup as a starter, Cao Lau noodle (a sliced pork noodle thing that was probably the best thing I have ever eaten and that I can’t wait to make again), and a Vietnamese fish curry. One of the best things was tasting the subtle differences between mine and Nic’s dishes at the end, illustrating what a tiny variation in quantity and a pinch of salt or sugar can do.

After our third meal, we were completely and utterly stuffed. Ngyuet arranged for our ride home, and we left Baby Mustard so ridiculously satisfied with the entire experience that we forgot we missed out on our desserts. Later on in the evening, Ngyuet contacted Nic by email saying that she was so sorry she forgot them, and if we wanted, she would drive the desserts back over to us. As Nic and I lay on the bed nursing our protruding bellies, we both agreed that she should keep them for the sake of our health.
it finally found me > < around hoi an